Default moves
The moves you go to first and always. You dont think, you run the default program.
In most of life you have a default program for everything.
Think about getting up in the morning, you will often so the same or similar things.
Hit snooze, sit up stretch, kiss your partner, go to the toilet, wash you face, put on kettle and so on and so on.

Most morning it will be the same, ok maybe on monday you set the coffee machine before going to the bathroom. This is your Monday default program.
Same for self defence. You do what you have been trained to do over and over. The repeated, unconscious movements that you dont think about.
It is often harder to teach a trained person than someone who has no training. Example several people have come to me for training in techniques for their job as a security guard. However their back ground is Muay Thai. Nothing wrong with the art. Highly effective striking and kicking art. Not the best to use in public situation.

So a guy throws a punch, bing their default setting kicks in. Parry, dodge and strike. Oh-no you just lost you job and face assault charges. Programming.
So we work on setting up self defence default setting. Including a program of awareness, escaping, avoiding, talking, defending, striking and running (for security we set up different programming, similar to above add more control than striking).
In defensive actions we work double shield, 360 defense, helmet and dive. yes there are other reactions.

Most of moves work on you natural response to an attack.
Without training your default setting maybe fear, freeze, flight or fight.
We develop the ability to control fear, we train so we can remove the freeze portion by giving you default setting. We enhance you flight response so you get out safety and if you need it install simple, easy to learn and highly effective fight tactics.

When is ask people what they would do in an attack scenarios, I get run, poke them in the eyes, smash in the throat or knee them in the balls. Great tactics until I grab them say in a wrist grab or get in their face and we get fear and freeze.

If they have trained in other arts I get the most train response if that a spinning hook kick that what they do. Boxers box, strikers strike or kick, grapplers wrestle. That their program. Its learned skill. Dont get me wrong they can be great moves. Even get you out of trouble. But watch a boxer get hit in the nuts or a mma guy get an accidently poke in the eye. Something that out of the normal, and get a different reaction. Boom no default setting.

Working with a friend Karate points sparring Champion. We are have a friendly spar, he has very quick hands, so he would punch out at my stomach score a point and back away to his line to await the ref's decision. I wasnt in the same league, not by a long shot. So i change the rules after he attacked me i would continue with my attack and punch him in the head. His agruement but a full power punch would have stopped you. so we padded up (safety first). We start step in full power shot to the stomach, Its hurt a little, but I walked through it and punched give him several hard shots to the head (lucky for helmets). Different reaction now, My default setting is keep on going even if hit or injury, something that comes from Filipino martial arts, BJJ, Muay Thai and Krav Maga training. That a different mind set and programming. 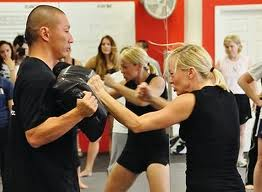 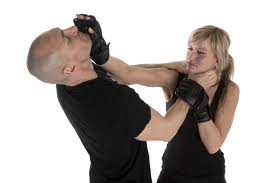 To train you every scenario or situation not possible.
Give you a series of default programs that you use over and over in many circumstances.
Whats your default setting and how can we help improve, enhance or install that programming.
Posted by Stan the Self Defence Man at 06:16