its a party and you need options


This happens more often than you think........
Why because you are likely to go to more family and friend gathering for birthdays, celebrations, xmas, easter, get togethers, partys, engagements, shindigs and just mates over.

......you are at a party you best friend has one too many, and makes a dick of himself, and challenges a guy who spilled his beer...

.....a guy that a good friend of your sister, had a bad day at work and got laid off you looked at his girlfriend, hes looking for pay back from his boss and you are it, he just want to be manly....

......in most of these cases, you may need to defend yourself, protect others or just remove him from the scene so he can calm down.

You don't need maim or kill techniques.
Smashing you best friend down, breaking all his teeth, hitting a guest or punching out your brother is not the best move.

There is an answer CONTROL if you could subdue them and remove them from harm or from harming others that would be a better solution.

In September at Streetsmarts Self Defence Tactics we will be looking at such techniques. Tactics that law enforcement, security and civilians can use to protect themselves but without needing to resort to violence.

Much easier to restrain your brother, remove him to another room get him to calm down than stomp his bloody head in.

13 moves in all taught be the likes of ISR Matrix, security and law enforcement. that allow you to defend income attacks, get control, remove suspects and is fantastic for the use of force. Low level threat require a low level answer. He is pushing you in the chest, no need to bust his skull, stomp his knee, cave in his ribs or rip out his throat. why not use an arm drag to pass his arm to a harness to hold and smoothly bundle him outside.

Great for third party protection, stopping you mates from fighting the dickhead in the corner making trouble and even terrific for multiple attackers.

Come on down to learn one of the single most important defensive move I can teach you - the helmet, best thing to stop you get knock the fuck out.
I have used it mma, muay thai, bjj, self defence and even taught it to kids for anti bullying. Then add a series of control moves to it you are not going to the hospital or the police station for a small misunderstanding at a gathering, tie the guy up talk him down or walk to the down, no harm, no agro and in the morning still friends.

September is Subdue Month.  Self defence can be dialled down or dialled up to the force required for the situation someone tries to grab you playfully you can easily swat them away and keep walking you don't need to poke your finger in their eye up to the third knuckle.  someone tries to rape you dial it up and rip their balls off.  Two very different situations. 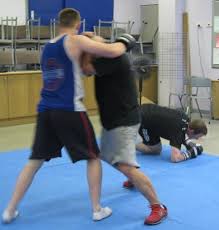 Posted by Stan the Self Defence Man at 07:56